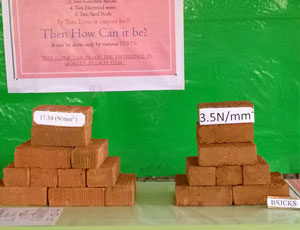 In the case of apartment, the entire load is taken cases. If of the framed structure and hence the general feeling of everyone is, it is only for the purpose of partition. Hence, in general all inside walls are made up of 4 inch brick walls and all outside walls and wall in between two apartments are made up of 9 Inch Wall.

Nowadays, everyone preferred to conceal wiring and concealed Pipe Lines. So 2 to 2½ inches are cut open on these 4 inch walls and many places, similarly most of the junction boxes & switch boxes require more space & hence wall is broken through

When the routine cutting is done, if one practically goes near the wall, we can see the wall just float/shaken as if it may fall at any time. Then usually the pipes are fixed, concrete / market covered and plastered and strengthens their 4 inch wall.4 inch walls cover the most of the walls generally in apartments.

Water absorption test: Five bricks are picked at random from a stack of bricks intended to be used. They are then dried thoroughly in a laboratory oven at a temperature between 105¤C to 110¤C. Thereafter they are cooled and weighed separately. Then they are kept immersed in cold water (27¤C or – 2¤C). After 24 hours the bricks are taken out of water and excess surface water is wiped off using a damp fabric. Immediately after, they are weighed again separately. Supposing that the dry weight of a brick is Wd and the wet weight of the same brick is Ww, the water absorption capacity of the brick expressed in percentage of its dry wt. is = (Ww – Wd)/Wd X 100. Upon calculating the same for each of the 5 bricks the average is finding out which is considered as the water absorption capacity for the bricks. The water absorption capacity of first class bricks should not exceed 20% when calculated as described above. The same for 2nd and 3rd class bricks are not to exceed 22% and 25% respectively. For any superior quality brickwork, first class bricks only are recommended while 2nd & 3rd class clay bricks are advised for moderate to low quality work.

Get Special Discounts on Your Bookings!